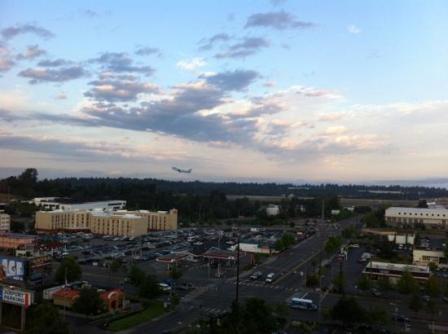 Above : Good views can be had from an Airport facing room at the Doubletree 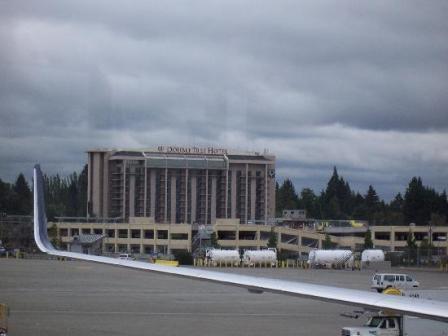 Above : A shot of the Doubletree from the apron demonstrates the great location of this hotel. Photo  Credit  Tripadvisor

The La Quinta hotel is situated to the south of the Doubletree above. From this hotel you can see aircraft arrive and depart although you would require flight tracking to tie up. A few stands are visible from this hotel but the runways are well hidden behind the hanger area.

The Super 8 hotel has single rooms only at the front of the hotel which gives good views of departures off 16. No arriving traffic on 16 could be seen from here though.  Many room views are obstructed by trees, room 319 was reported to have great unobstructed views in 2015. Note that all double rooms are on the wrong side of the hotel and do not have views.

A high floor on the Days Inn over the road from The Doubletree is also reported to have reasonable views.

The Country Inn and Suites has rooms facing the airport which offer views of departing traffic off the Runway 16’s. You need a double bed room here for the views, twin bedded rooms face the wrong way. Rooms at the north end of the hotel are close to a large window in the corridor which gives distant views of aircraft on short finals for the 16’s. Room 313 has reportedly the best views and is also located close to the above corridors window.

The Holiday Inn Express is located next to the monorail with obstructed views. High level rooms give views of either aircraft climbing out from the 16’s, or on short final to the 34’s. Rooms 421 and 521 have the best views, 521 is on the top level and is a corner room.